The Freedom100 Fund shows we can treat immigrants with dignity, not detention

Through a combination of impact-first finance, a coalition of dedicated philanthropic and impact investors, and an incredible organization advocating for immigrant dignity, 100 people are now free from immigrant prison. Mission Driven Finance designed the Freedom100 Fund in partnership with Freedom for Immigrants—a national 501(c)3 nonprofit devoted to abolishing immigration detention—to amplify the limited supply of donations for paying immigration bonds with investment capital to get people out of a dehumanizing carceral system. The fund made first disbursements to Freedom for Immigrants to post bond in July of 2020. Less than a year later, we achieved the goal of securing the release of 100 immigrants stuck in US ICE prisons and unable to afford the high cost of their bond. That’s the power of transformative finance. One hundred people liberated from immigration prison and reunited with their families and communities of support, where they can focus on healing and winning their case

What are immigration detention bonds?

U.S. immigration detention is the government practice of incarcerating individuals while they await a decision on their immigration status, which takes years. Detained individuals sometimes have the chance to be released on a cash bond—like bail—while fighting their cases.  Many families cannot afford the high bond amounts set by Immigration and Customs Enforcement (ICE) or by immigration judges, forcing loved ones to languish in detention indefinitely. This pushes families into poverty and creates emotional strain for all. Through the Freedom100 Fund, 100 detained individuals in some of the best and worst jurisdictions were released on bond—at no cost to them—while awaiting the resolution of their immigration cases. This allows them to get the mental, emotional, health, and legal support they need as they reconnect with friends, family, and community. The bond supported the freedom of 78 individuals in California, 21 in Louisiana, and one in Illinois. Bond amounts for the 100 people supported by the fund ranged from $5,000 to a whopping $50,000, with an average of $11,405. Freedom100 capital contributed $9,778 on average for each bond, augmenting support from other community organizations and occasionally families.

Who did Freedom100 support?

One of the first freed with support from the fund was Adrian (name changed to protect his identity), who languished for over a year in the Adelanto Detention Center in San Bernardino County. Once freed, Adrian was already moving beyond the unimaginable pain he experienced to focus on helping others:

“I felt relieved knowing that my family and I were going to have your support. The waiting process was difficult, but it motivated me to keep going. Like many other migrants, my family and I are living by our means and just trying to get by. I am grateful for what Freedom for Immigrants did, and I want to help the organization and other people in similar situations in any way I can.”  — Adrian, Freedom100 bond recipient

The Freedom100 Fund community helped secure the freedom of people originally from twenty-nine countries, including twenty-six from Mexico, nine from Cameroon, and eight from Mauritania. 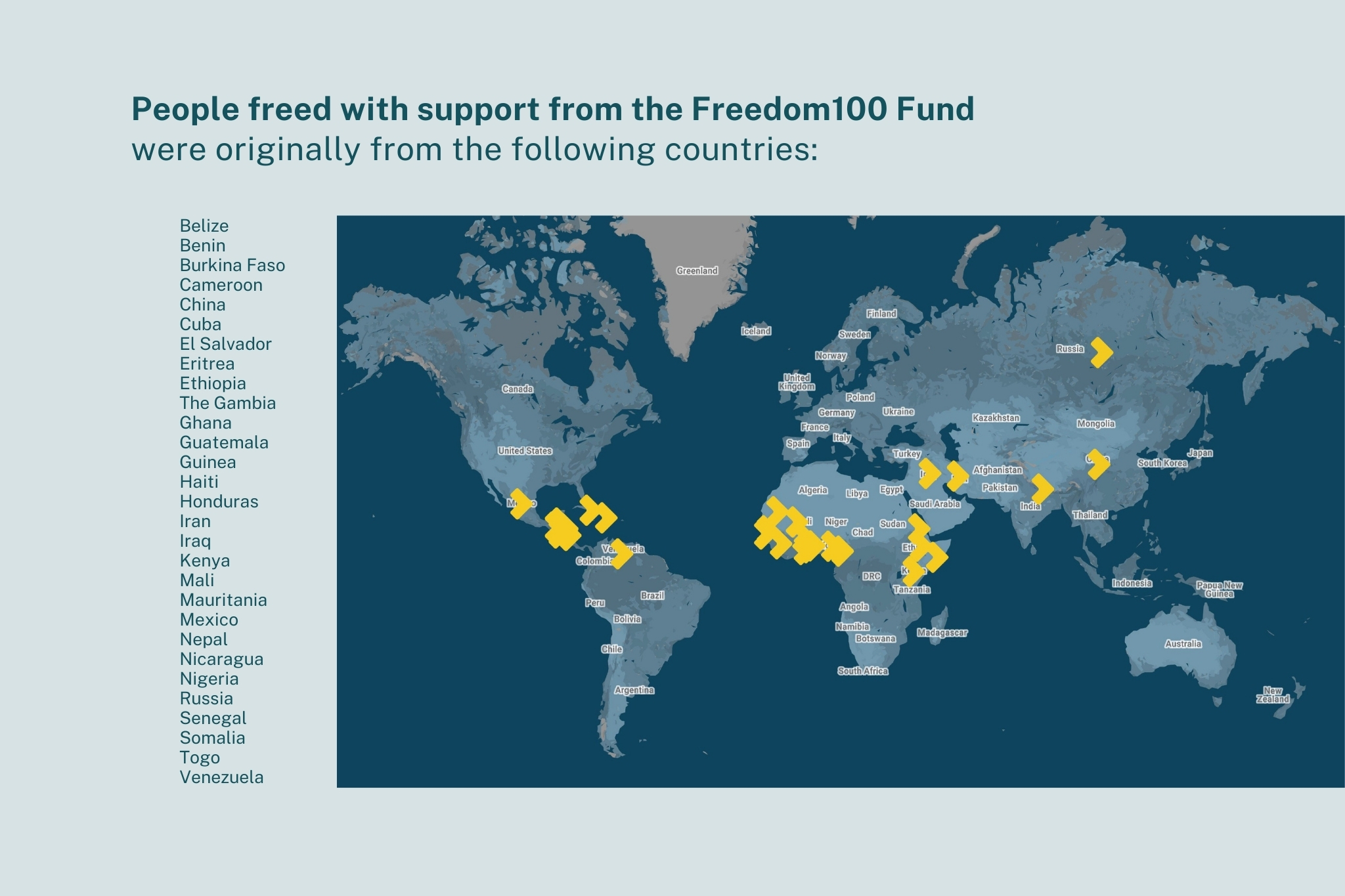 Those who got to reunite with their communities include Sergio, Daniel, Randy, Seun Okunlola (seen here with wife Kelsey), and Ariel, who received the 100th bond posted with support from this fund.

The Freedom100 Fund has significantly improved Ariel’s legal situation as he is eligible for the Cuban Adjustment Act, but only if released from detention. Now that he is free, he can apply for a green card in one year and, if all goes well, eventually bring his young children to the U.S. too.

We saw in the records shared by Freedom for Immigrants that not all people are treated the same in the immigrant detention system.

Okunlola’s experience in our country’s immigration system reflects the systemic bias and racism that many Black immigrants face—a disproportionate risk of being detained, higher likelihood of solitary confinements by ICE, greater risk of deportation, higher bond amounts (if a bond is issued at all), and longer times to release.

In fact, after nine denied attempts to post bond for Okunlola, Freedom for Immigrants filed a Civil Rights and Civil Liberties Complaint with the Department of Homeland Security. This complaint ultimately applied enough pressure to sway the local ICE field office to do what they should have done months prior when a bond was issued for Okunlola—free him.

Together we are building a world without detention so that people like Okunlola can live their lives free of fear and persecution. And while we have much work to do, it’s milestones like these that ring loud the power of community to build new systems that can free us all.

Five of those freed are LGBTQ individuals, another community that faces higher levels of harassment than the general population.

One of the people supported by the fund is a trans woman who came to the U.S. from Central America to seek asylum, fearing for her life after experiencing harassment, threats of rape, and murder by gang members.

We know that immigration detention creates psychological stress and terror for anyone who is subject to this inhumane carceral system. It is no surprise that these conditions are even more complex for LGBTQ people.

According to Freedom for Immigrants, LGBTQ people not only face life-threatening homophobia in their home country, but also from ICE, prison guards, others in detention, their family, and even from immigration judges—who may unreasonably demand they “prove” their sexual orientation.

LGBTQ people flee their home countries because of specific dangers they face. They should not have to risk their lives to make a perilous journey to seek safety in the U.S., only to face further harassment, isolation, and trauma when they make it to the border.

Because of the acute trauma LGBTQ persons face, Freedom for Immigrants prioritizes the release of LGBTQ people in detention when they receive requests from the LGBTQ advocacy community. Post release, Freedom for Immigrants works to ensure that appropriate mental health services are more readily available to LGBTQ immigrants to grapple with the trauma experienced before, during, and after detention.

What happens after bond?

Freedom for Immigrants and their network of partners provides each person bonded out with case management support, including housing, connections to attorneys, transportation, and mental health services to ensure they have the best chance of winning their case.

As with any change, it starts with community action and investment. That’s what the Freedom100 community is all about. With every person freed from immigration prison and reunited with family and communities of support, we are one step closer to building a world without detention. Thank you for bringing this vision to life and making possible safe spaces for immigrants stuck in detention. Together, you have shown that we can treat immigrants with compassion, not confinement, with dignity, not detention.